What Is REM Sleep and Why Is It Important? 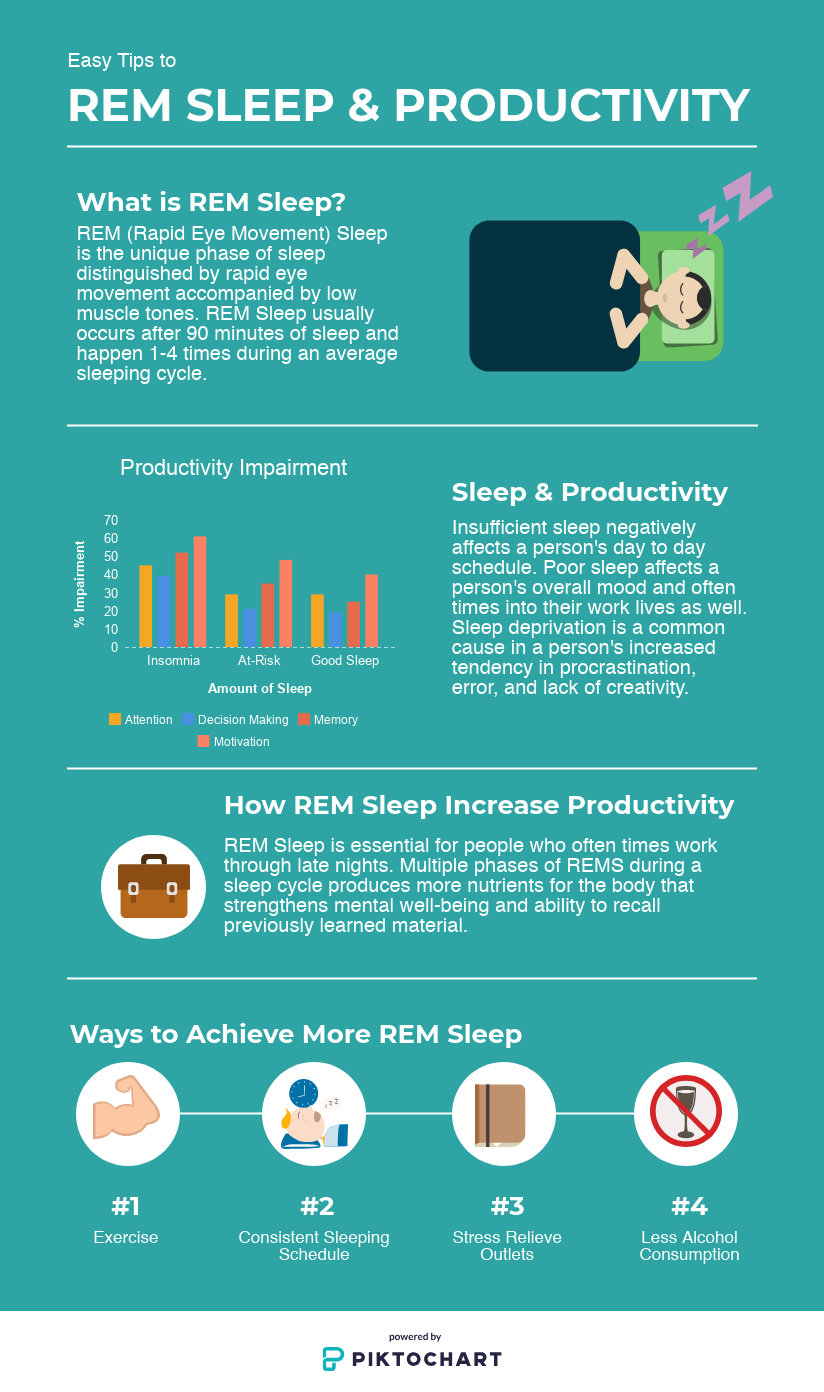 The Cycles of Sleep

WebMD states that there are three phases of non-REM sleep, which happen directly before REM sleep happen. The first phase is very light, and the sleeping individual may be relaxed but can still be awakened fairly easily for up to 10 minutes. The second phase is necessary for the sleeper’s body to prepare for deep sleep. During this phase which lasts on average 30-40 minutes, the heart rate and body temperature begin to lower. In the final phase of non-REM sleep, Deep Sleep occurs, and the individual becomes much harder to wake up. The body repairs tissues, bones, and boosts the immune system during this phase and is important for recovery. REM (Rapid Eye Movement) Sleep however, is just as or more important than the deep sleep phase of NREM sleep. During this first REM sleep that usually occurs after 90 minutes of sleep, brain activity actually increases, pulse gets faster, and the eyes begin “rapidly moving” underneath closed eyelids. The first REM sleep is fairly short under 10 minutes, but each REM sleep increases in duration as it continues to cycle back and forth between NREM and REM.

What does REM Sleep Do For You?

A study by the National Institute of Neurological Disorders and Stroke discovered that rats that slept, but were deprived of the REM portion of sleep, actually had their total life span shortened from 2-3 years to just over a month. This portion of sleep is critical to an individual’s general vigor and mental well-being, and is the reason why some slumbers may feel more fulfilling than others. The concept of REM sleep is very essential for those that may not be able to benefit from a full night’s sleep or have irregular sleep schedules. This includes truck drivers that must be constantly aware throughout the night, jobs that require late-night or early morning shifts like in the police force, or even those that work multiple jobs. Naps throughout the day are often the best solutions to a shortened sleep, but with careful planning of sleep hours, those that constantly feel drained and have low energy at work can mitigate these negative effects by maximizing REM. During REM sleep, the pons located towards the bottom of the brain sends signals to other parts of the brain, most importantly the cerebral cortex. This layer is important for people to learn and actively think, which is why dreams nearly always happen in conjunction with REM sleep. If you have ever experienced “sleep paralysis” or heard of someone experiencing this phenomenon, it is because the pons intentionally induces temporary paralysis of body muscles so that sleepers do not physically react to the dreams they are experiencing. These areas of the brain are stimulated in the process and help increase the ability to learn in the day. One theory behind why babies and children require so much more sleep than older adults is because REM sleep is crucial to brain development and learning. Another benefit of a prolonged sleep is higher production of necessary nutrients that assist people in strengthening mental well-being and ability to recall previously learned material.